Paul Harman, who was from 1994 to 2008 Artistic Director of Cleveland Independent Theatre Company, later to become Theatre Hullabaloo, reflects on his career and the importance of recognising the rights of children in the arts.

Coming from a long line of theatre-makers, dating back as far as the Victorian Music Hall era, it seems show business is in Paul Harman’s blood. Indeed, when we caught up with him shortly before Christmas, he stated quite plainly that he ‘couldn’t do anything else!’ We soon discovered, however, that Paul’s perception of his long success in the industry was not quite what we expected.

Paul explains, rather modestly, that his draw to the arts stemmed less from a burning desire to perform than from his feeling that it was all he was ever good at. This proved slightly problematic as Paul’s mother, the daughter of a successful variety artist, seemed to have almost actively dissuaded him from entering the industry himself. ‘My mother felt that on no account should you trade a happy family life for the glory and attractions of the theatre – it’s a risky business’ says Paul; ‘you take a part, rehearse for two three weeks, perform for two three weeks, then it’s gone and likewise, many of the people around you are gone.’ It was perhaps with this warning in mind that Paul enrolled to read Russian at Birmingham University, rather than to pursue any formal theatre training.

Far from distancing himself from the arts, however, Paul found himself drawn once more to the stage at university. In the Birmingham student-drama scene, he joined an eclectic cohort of talented peers from many different disciplines. Here he gained not only valuable experience in many different roles, from Shakespeare to acrobatics, but also formed life-long friendships that would prove instrumental in supporting the first decade of his career.

His time in Birmingham placed Paul front and centre in the minds of Terry Hands (of the Royal Shakespeare Company), Peter James and Michael Freeman when they founded the Everyman Theatre in Liverpool, inviting him to join their first seasons. But Paul’s first professional job was at Coventry’s Belgrade Theatre where after the first year he accepted a hybrid role combining acting and what we would now call “outreach”, which saw him perfectly placed in 1966 to join the team that was to pioneer the Theatre in Education movement.

Warned by Trevor Nunn, who directed him in his first professional shows, that he might make a career as a character actor in small parts, Paul decided that was not enough for a satisfying career.  When he returned to the Everyman, in 1970, he was given the role of Education director with a small team, and was soon invited to work with Priority, an education research project, with a Gulbenkian grant to take theatre and TiE into Inner City Schools.

It was not until 1978 that Paul used his powers of persuasion to coax the Arts Council to fund Merseyside Young People’s Theatre Company; an endeavour that was to last 11 years and revolutionise the way young people and their families were to perceive and receive theatre. During this venture, Paul commissioned a piece for schools to be written by Willy Russell. Blood Brothers was quickly adapted into a musical, going on to win an Olivier award; it remains a popular touring choice and curriculum resource to this day. Paul’s experience in Theatre and Education enabled him to reach audiences long since disenchanted with the arts, inspiring them once more with a passion for learning and a better perception of the wider world, as his work was not just local.

Practiced as he is in many languages, Paul traded work on the international stage. Translating many texts himself, he was able to help widen the horizon of theatre for young audiences in both the UK and abroad by sharing work from the likes of Dutch playwright Ad de Bont and companies such as Berlin’s Grips. In return, CTC toured to Moscow and Toronto, Seoul and Singapore, Bologna, Brussels and Bucharest. By the 1980’s, Paul’s esteem was certified and he sat as an active member on the UK board of the International Association of Theatre for Children and Young People (ASSITEJ) and its International Committee for a number of years – ending up as an Honorary Member of Assitej International and Life President of Assitej UK!

Much to our luck in 1990 Paul’s partner, Sarah Richards, was appointed Assistant Director of Darlington Arts Centre and the couple made the move from Liverpool to Darlington. It wasn’t long before Paul once more took up the mantle in the North East, directing plays for schools with the Cleveland Independent Theatre Company. When funding cuts threatened to kill off some of the regional theatre companies, Paul saw an opportunity to amalgamate the Cleveland Theatre Company and Durham Theatre Company, securing additional funding from the Arts Council to secure a specialist Theatre for Young Audiences company and paving the way for the birth of Theatre Hullabaloo.

Paul, again modestly, attributes the success of this new company to the regional artists and administrators who came on board at the time, many of whom like Chris Connaughton and Nina Hajiyianni still contribute regularly to Theatre Hullabaloo’s work. ‘Without Chris Bostock of Tyne & Wear Theatre in Education and Tony Ravenhall from York Young People’s Theatre, Theatre Hullabaloo would not be here today’, says Paul, going on to add that their support enabled him to continue to take risks, push the boundaries of ‘acceptability’ and further develop projects like TakeOff Festival. Of course, the majority of the credit must be given to Paul himself, for his persistent passion and drive to ensure that theatre remains excellent and accessible for young audiences and families in the North East.

In addition to consistently producing excellent theatre for young audiences, Paul has striven to provide consistency in the companies he has created. Perhaps to prove his mother wrong, he has established companies which offered security and long-term opportunities for his staff, working with a small repertory-style company of artists who were then able to grow their own work, have families and support themselves, even in the ‘risky business’ of theatre.

Paul’s variety genes have stood him in good stead, proving his assertion that he ‘couldn’t do anything else’ both true and false. His considerable talent has shone in a multitude of roles, not simply as an actor but as a creative, a linguist, a translator and a shrewd businessman to list only a few. His creative support has been instrumental in ensuring companies like Theatre Hullabaloo have flourished. ‘My strength has been to take risks, to push the boundaries of what is thought acceptable but always to respect the right of the child to understand what is going on in the adult world. A theatre of empowerment is vital in democracy; every child has a right to see themselves on stage in situations they recognise as truthful.’

Paul Harman was Artistic Director of CTC Theatre from 1994 until 2009 when Miranda Thain took on the mantle as Artistic Producer and Chief Executive of the organisation we now know as Theatre Hullabaloo. 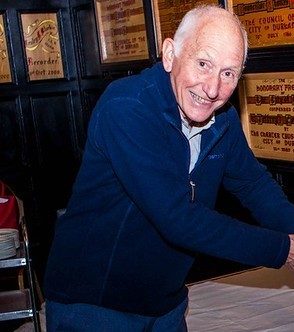 Hi Ali, can you tell us more about your role as Production Manager at Theatre Hullabaloo In usual circumstances, pre-covid, my role is to oversee…